Get In Touch
Get In Touch
;
Up against stiff competition from larger, more established brands, Techtop Canada used a strong brand, clear message, and unifying strategy to show their personality within a commoditized marketplace to better connect with their customers. Client Location

Burnaby, BC
Oakville, ON

Techtop Canada is the Canadian arm of a leading electric motor manufacturer and one of the largest exporters in China. A family-owned company since 1985, everyone at Techtop Canada understands that openness and unity are key to creating a dynamic and ethical work environment, where passion is greater than profit, and ethics trump ego. In short, they're our kind of people.

Techtop Canada originally approached us with one goal in mind: to build a new website. After learning everything we could about their company and their industry, we knew that, while a better online presence was important for their continued growth, it was only a small part of the solution. There was plenty of untapped potential waiting below the surface. They just needed a strategy to reveal it. 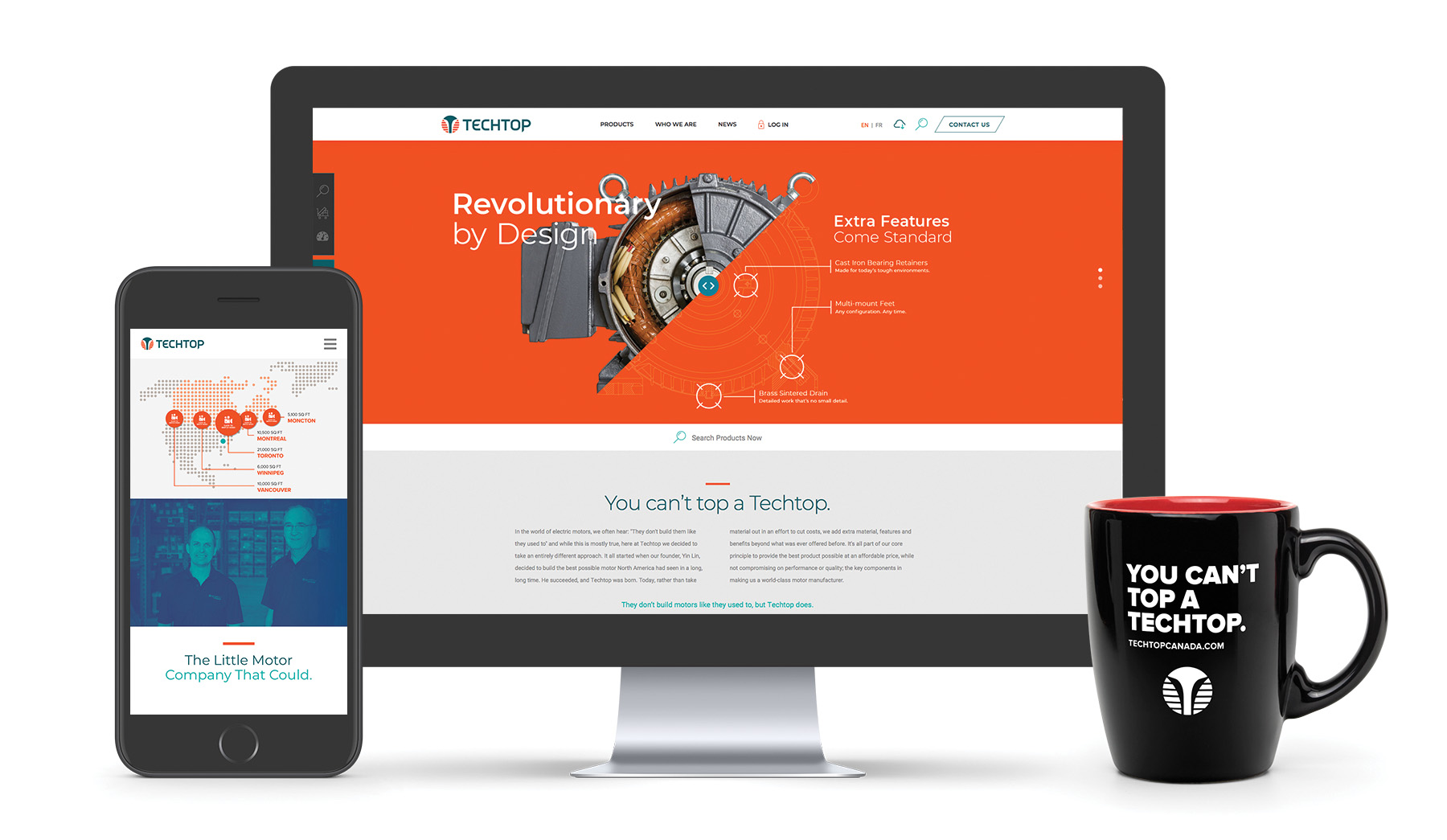 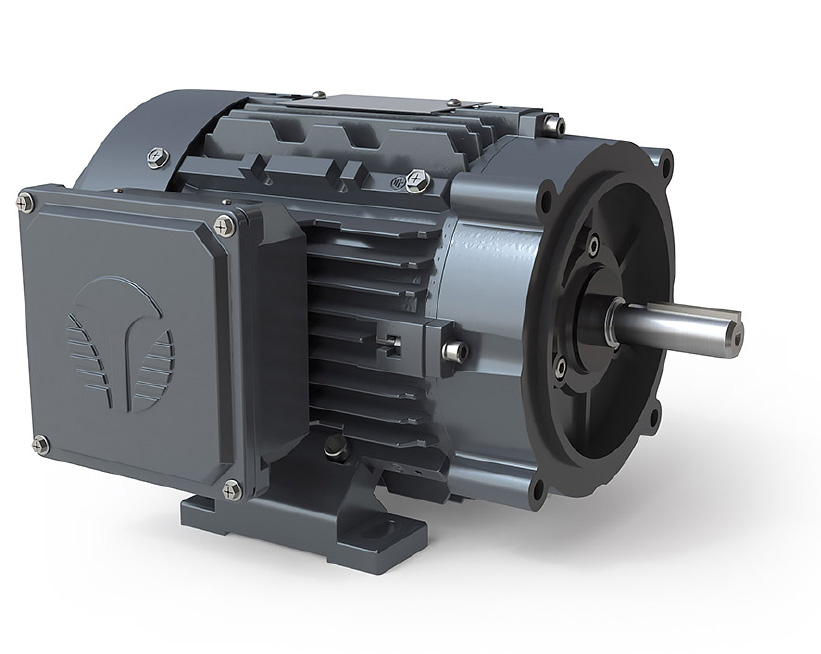 A website is only as strong as its content. We helped produce an extensive collection of highly detailed, pixel-perfect 3D renderings, using a fraction of the time and budget required for traditional photography.

Testimonial
What can you expect when you work with us?
Hear from the team at Techtop Canada. Together, we elevated their marketing strategy, design and technology to industry leader status.
Techtop's website sales have climbed into the millions.

Every ODG Communication Strategy provides an in-depth look at the obstacles facing the brand and offers actionable solutions to overcome them. Every strategy is summarized by one key challenge.

With a product that's reasonably comparable to others, differentiators that are stronger in a supporting role rather than on their own, a strong focus on price that could do as much harm as good, and a brand that's relatively unknown in the industry, what can Techtop do to increase sales?

Take advantage of their disadvantage 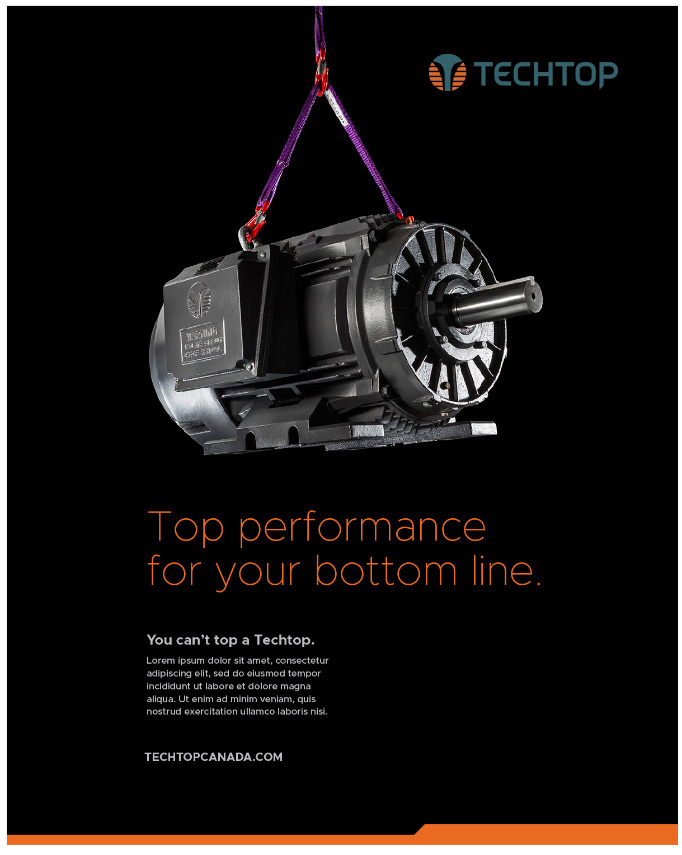 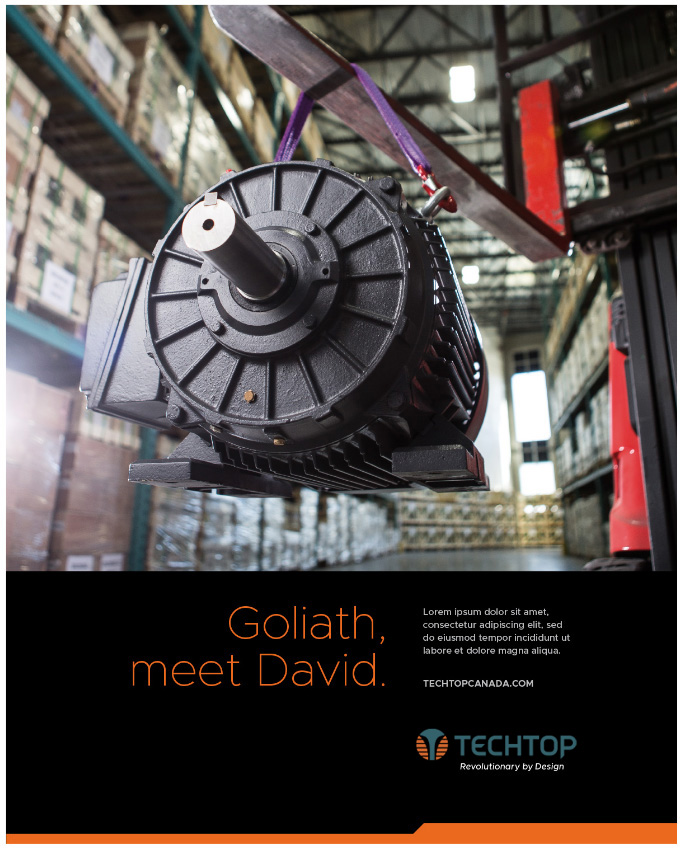 You can't top a Techtop.

This new tag-line was a hit with Techtop and is now seen throughout their marketing. 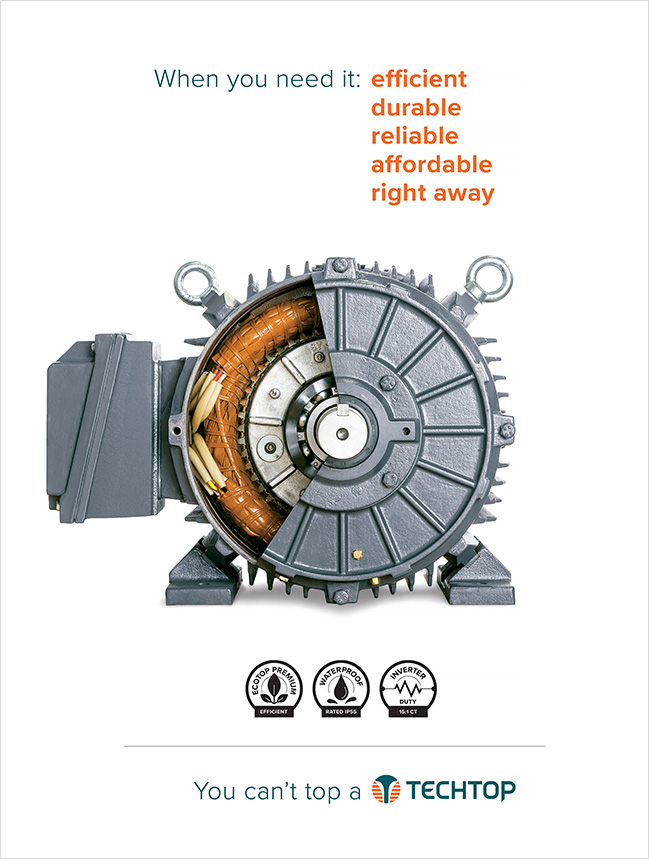 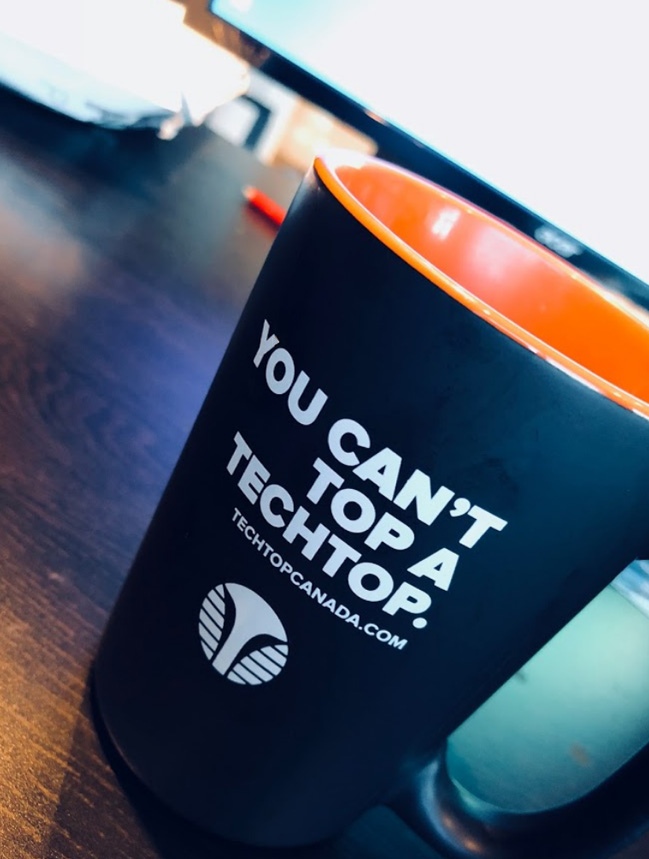 After approval of the overall brand strategy, we proceeded into designing the core graphic elements of the brand, such as the main logo word-mark, icon sets, color standards and photography. 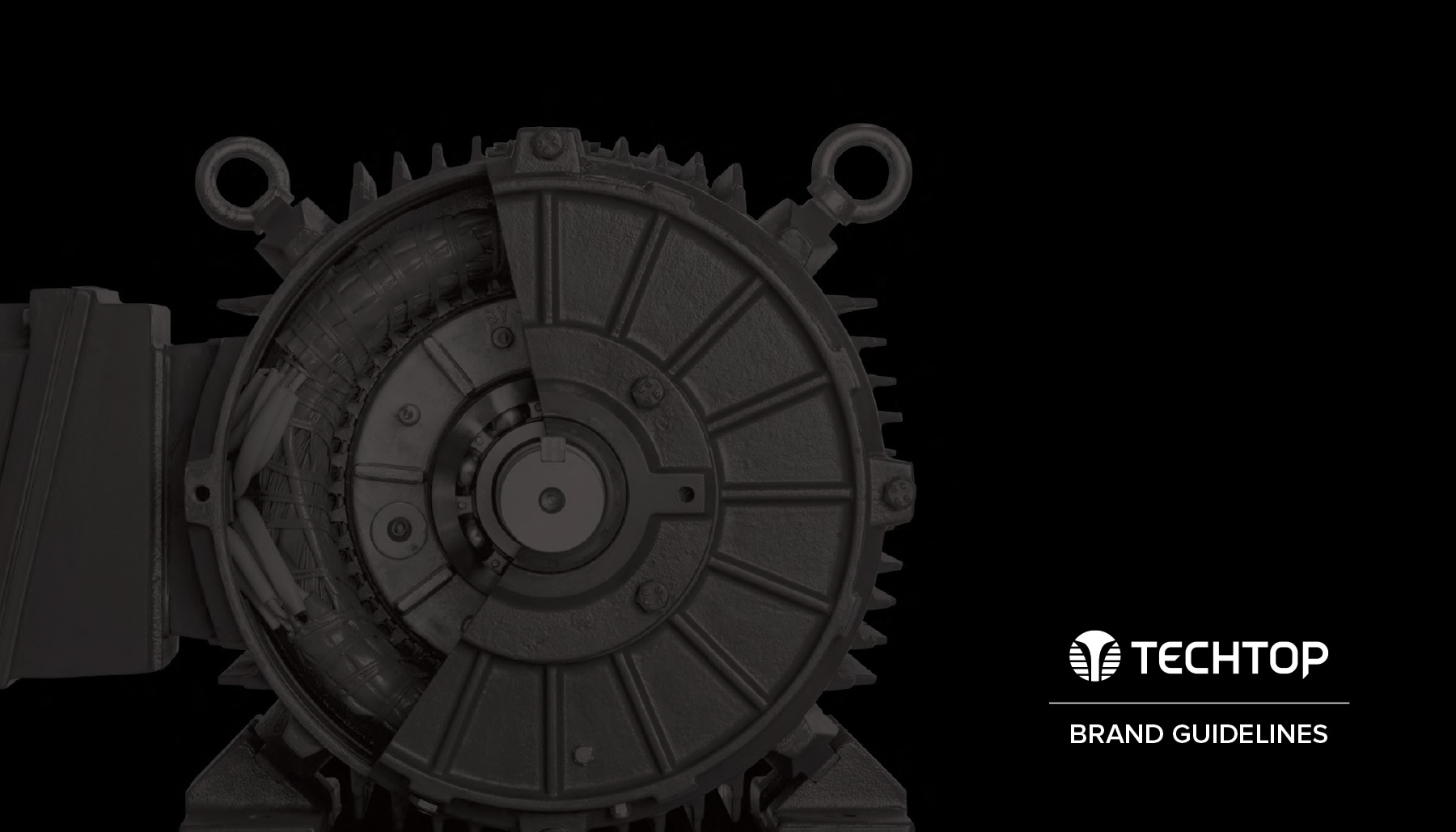 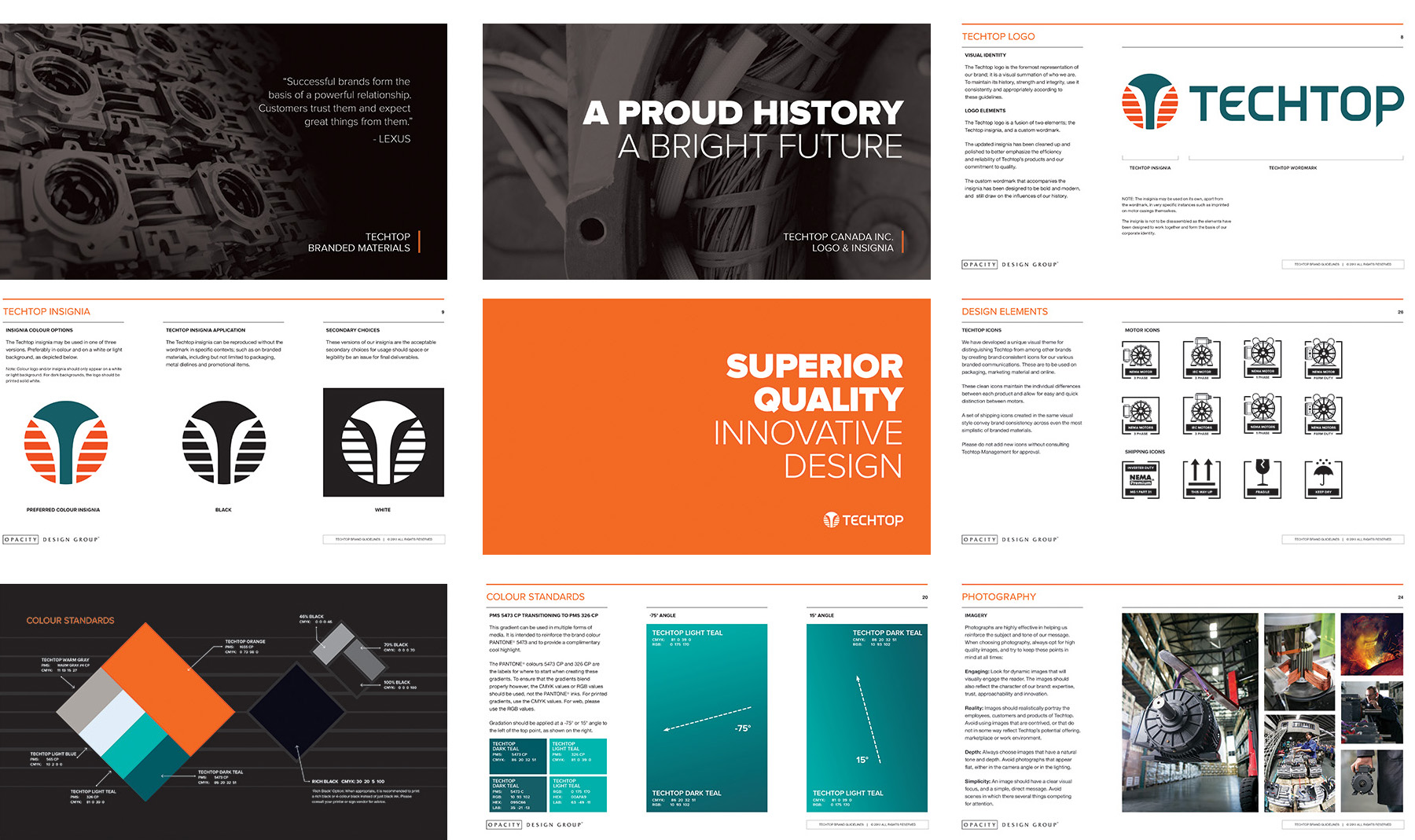 Our brand strategy outlined that photography should be bold and dramatic, with rich blacks and compelling lighting. We directed photo shoots at their office and warehouse environments to achieve the desired look.

Some rush projects came up once the new look was approved. 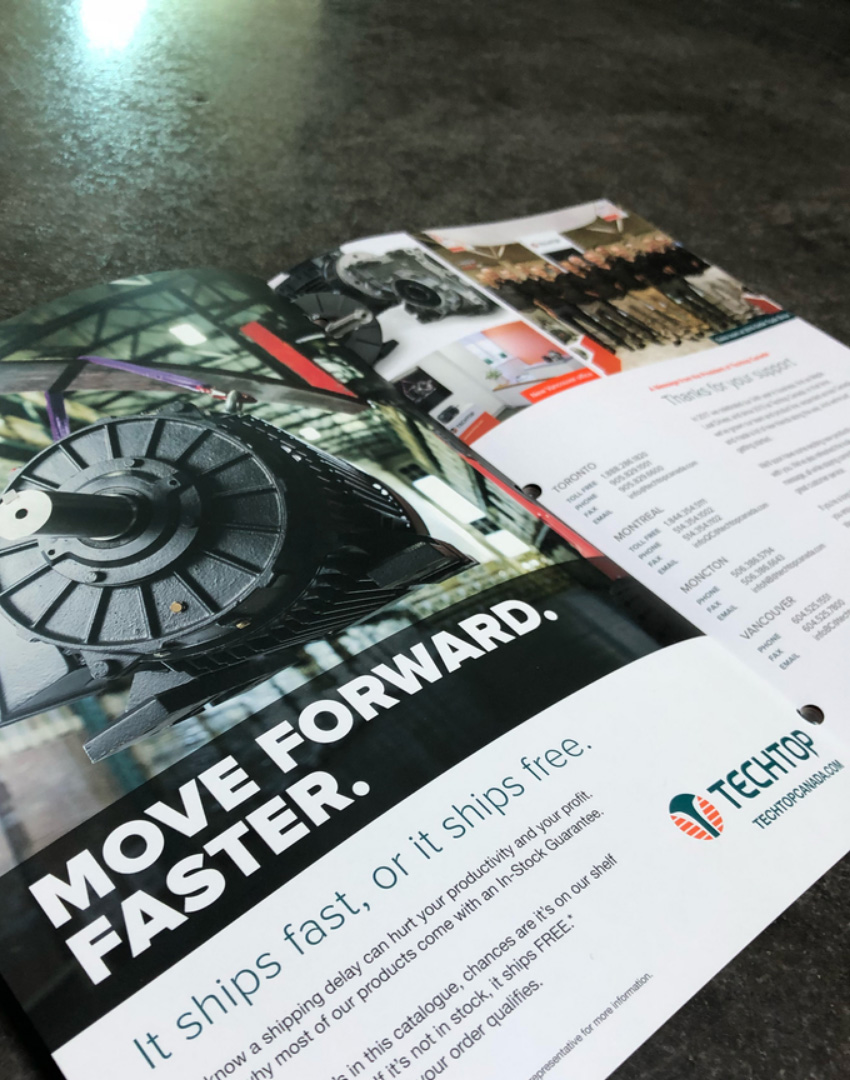 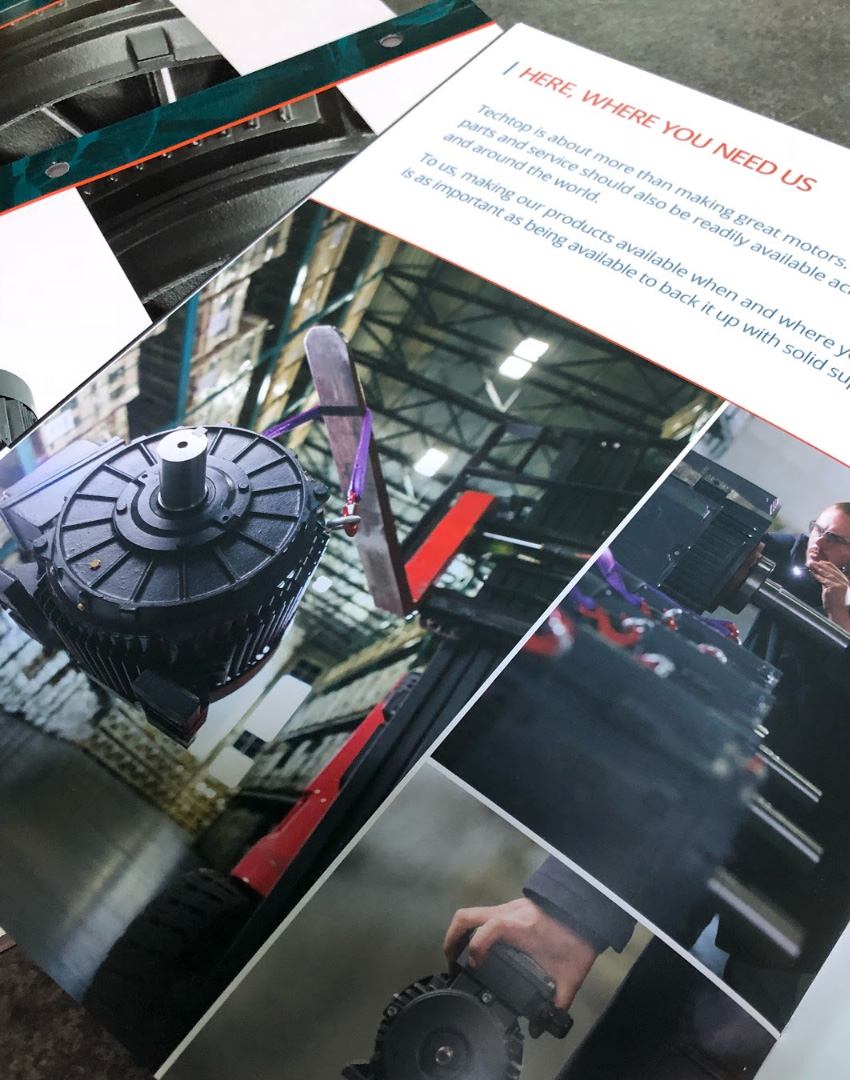 A complex system wrapped in a simple, effective interface. 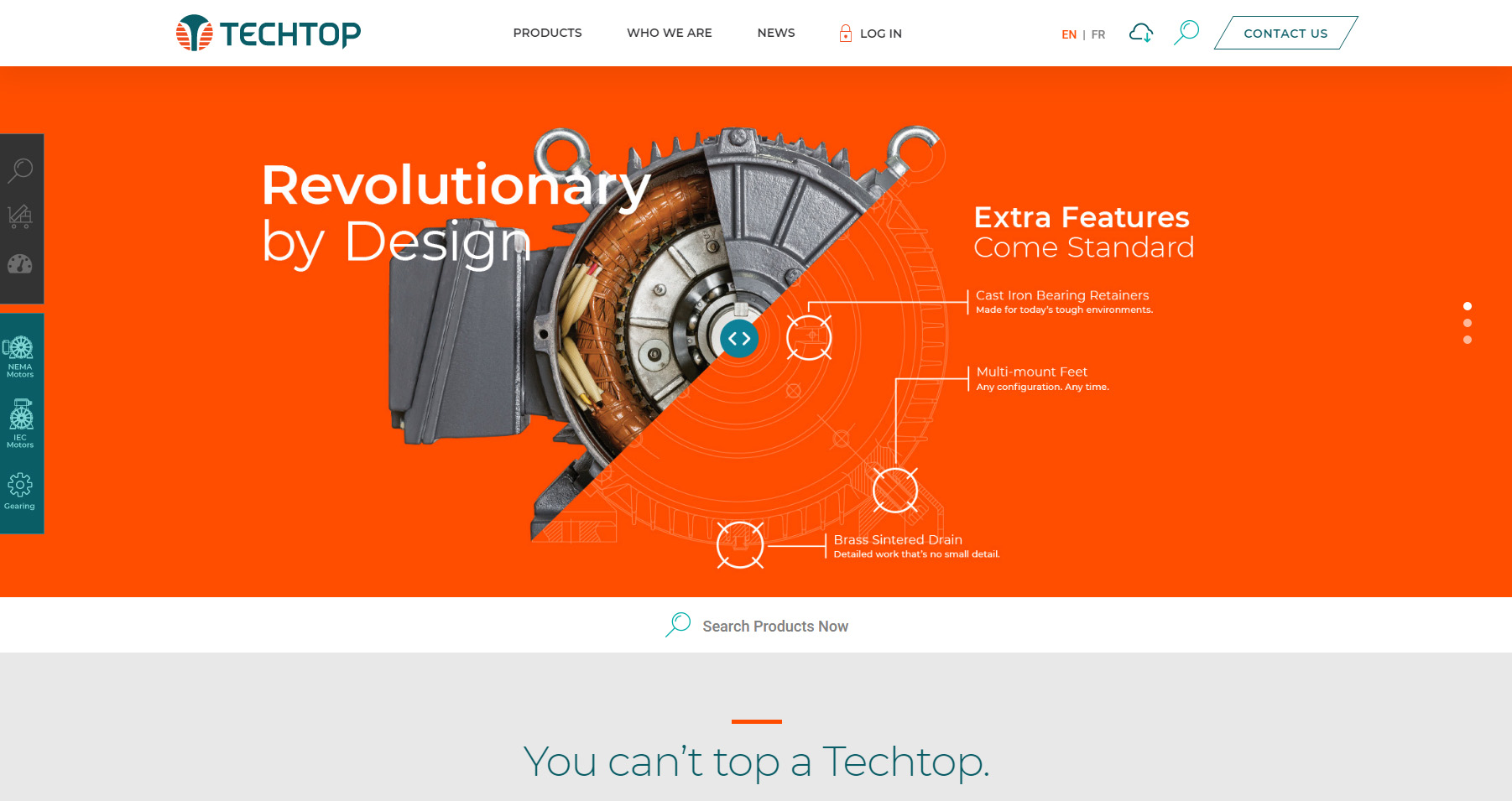 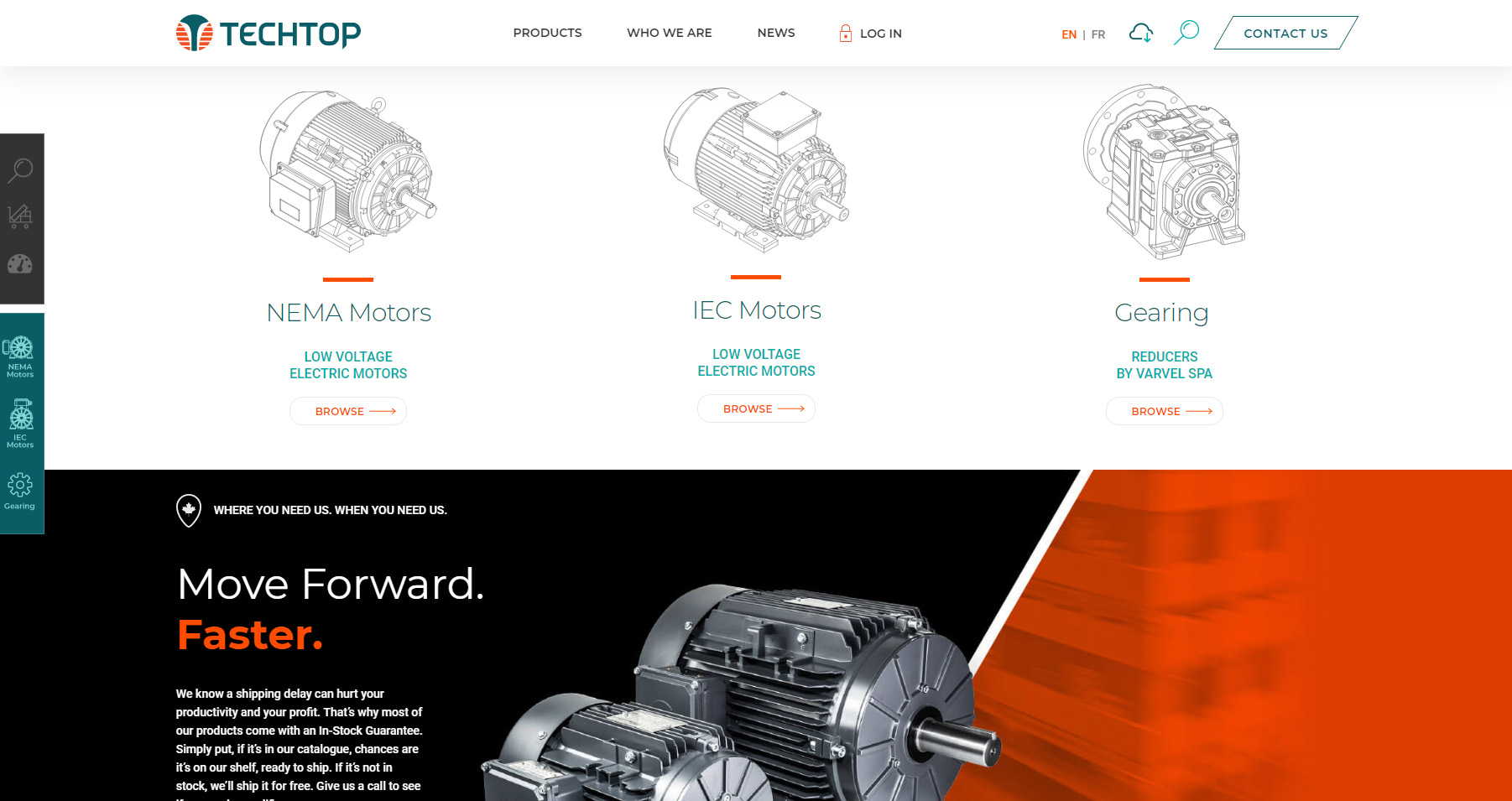 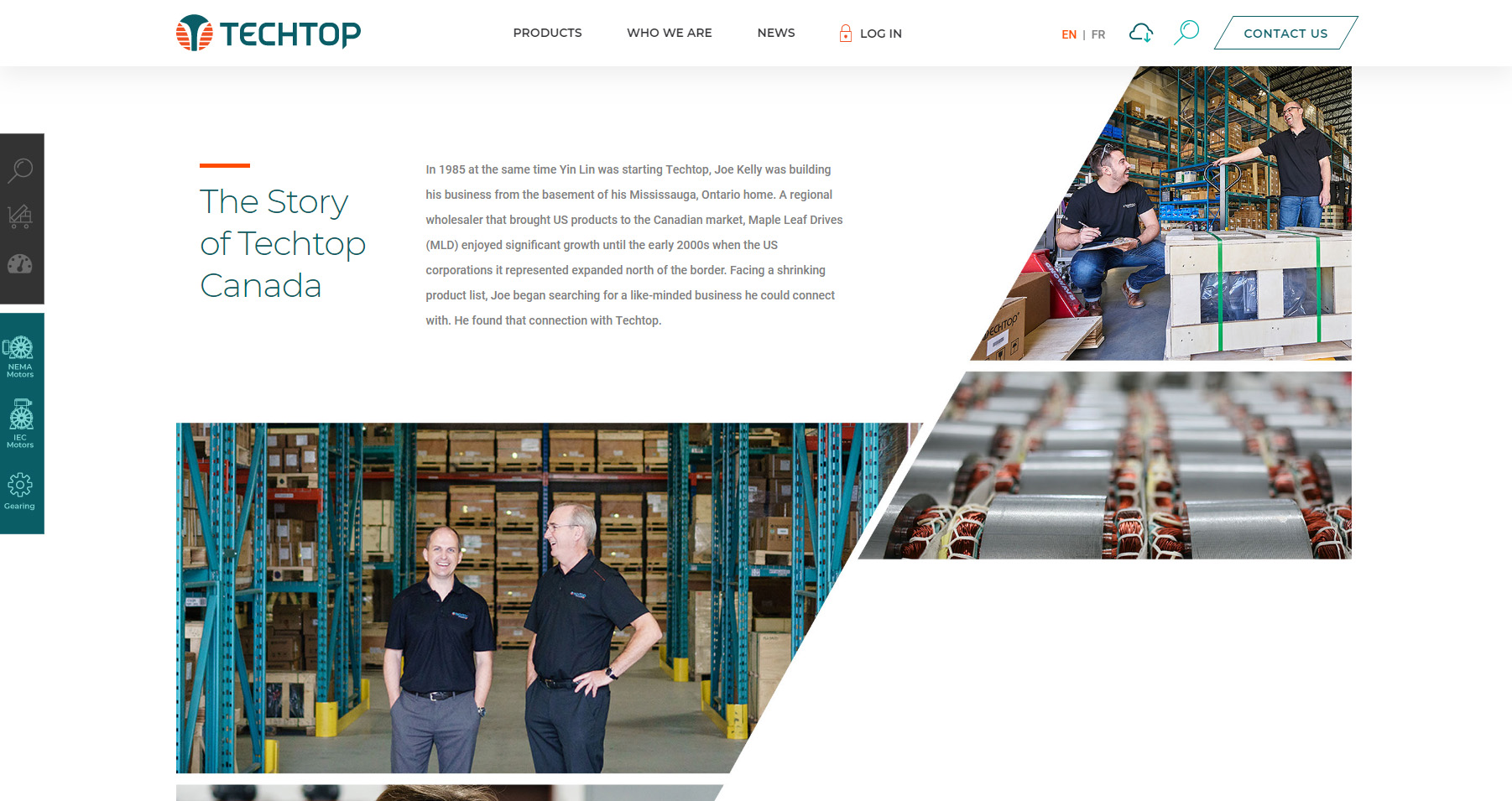 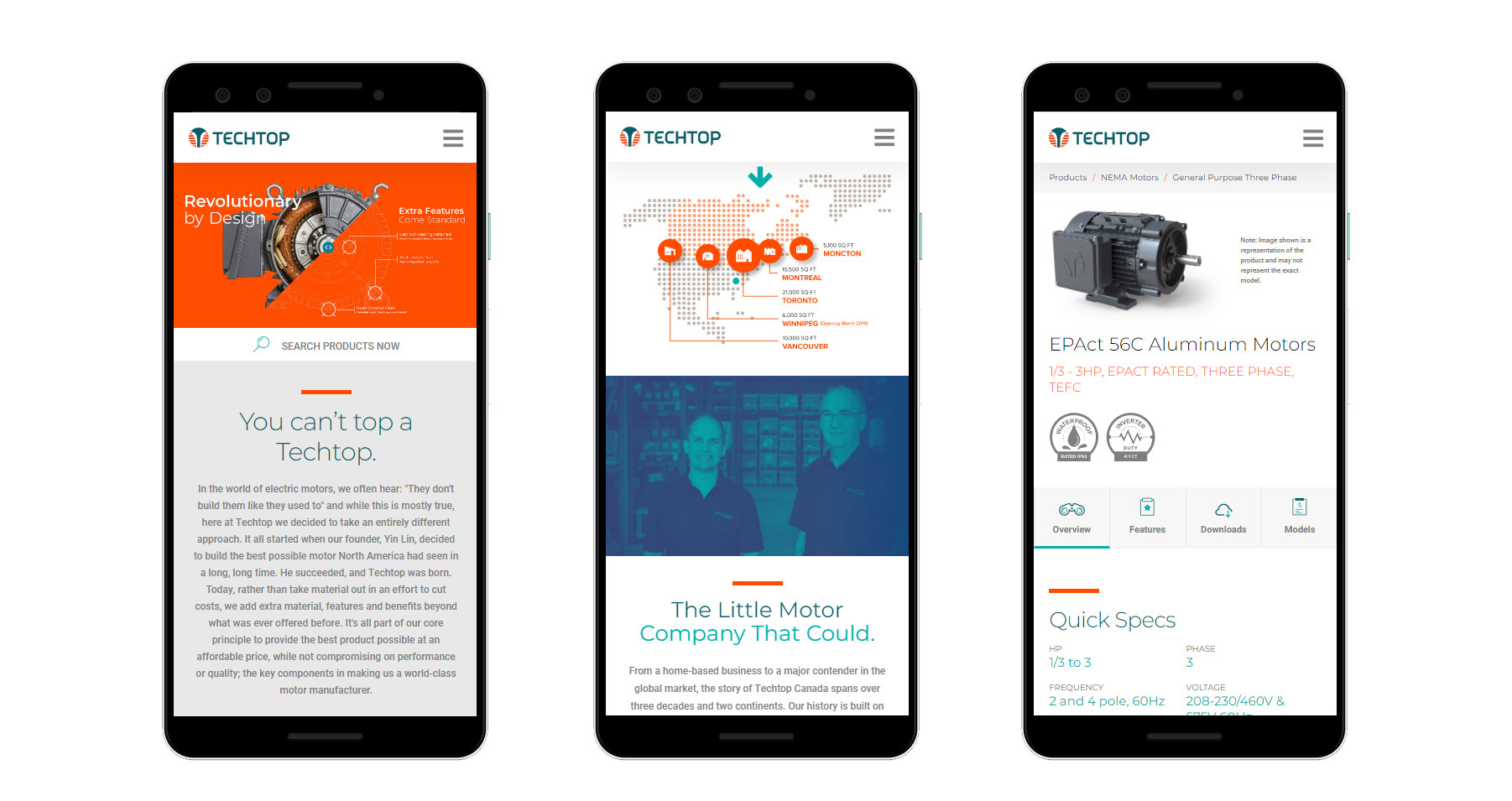 Each product on the Techtop website links to a comprehensive Data Package—a single, dynamic document with product-specific details, charts and graphs. With over 2000 SKUs, it would take two people working 40 hours a week for over a year just to create these data packages, and that doesn't include updates and revisions.

By automating the process and pulling product details from the Techtop database, we saved over 5000 hours of labour and guaranteed that Techtop's online documents will always be accurate and up-to-date. 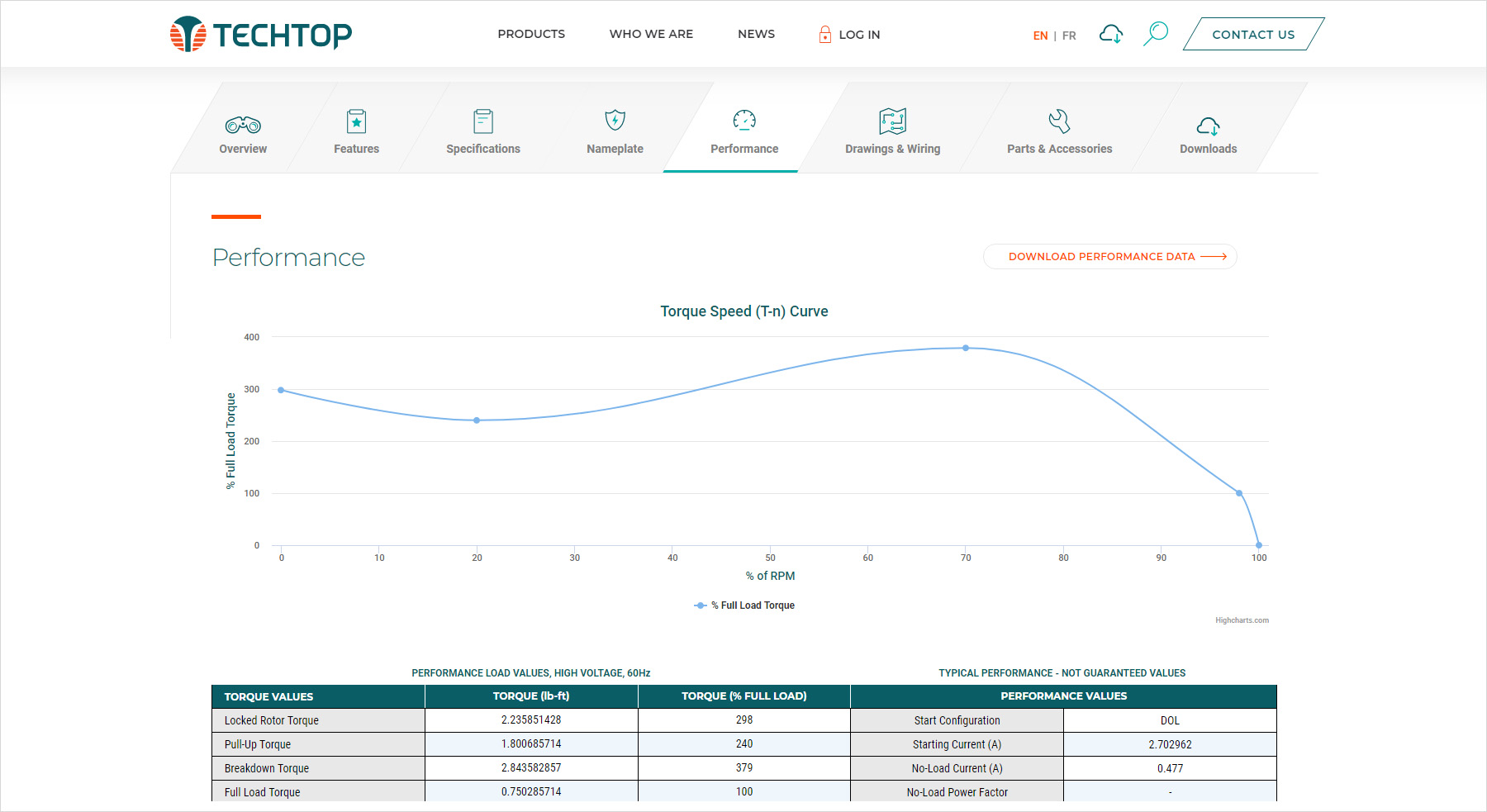 All product charts and graphs on the website were programmed to be completely dynamic, pulling their details directly from the Techtop database.

What was once a manual, tedious task is now an automatic function that has saved thousands of hours. 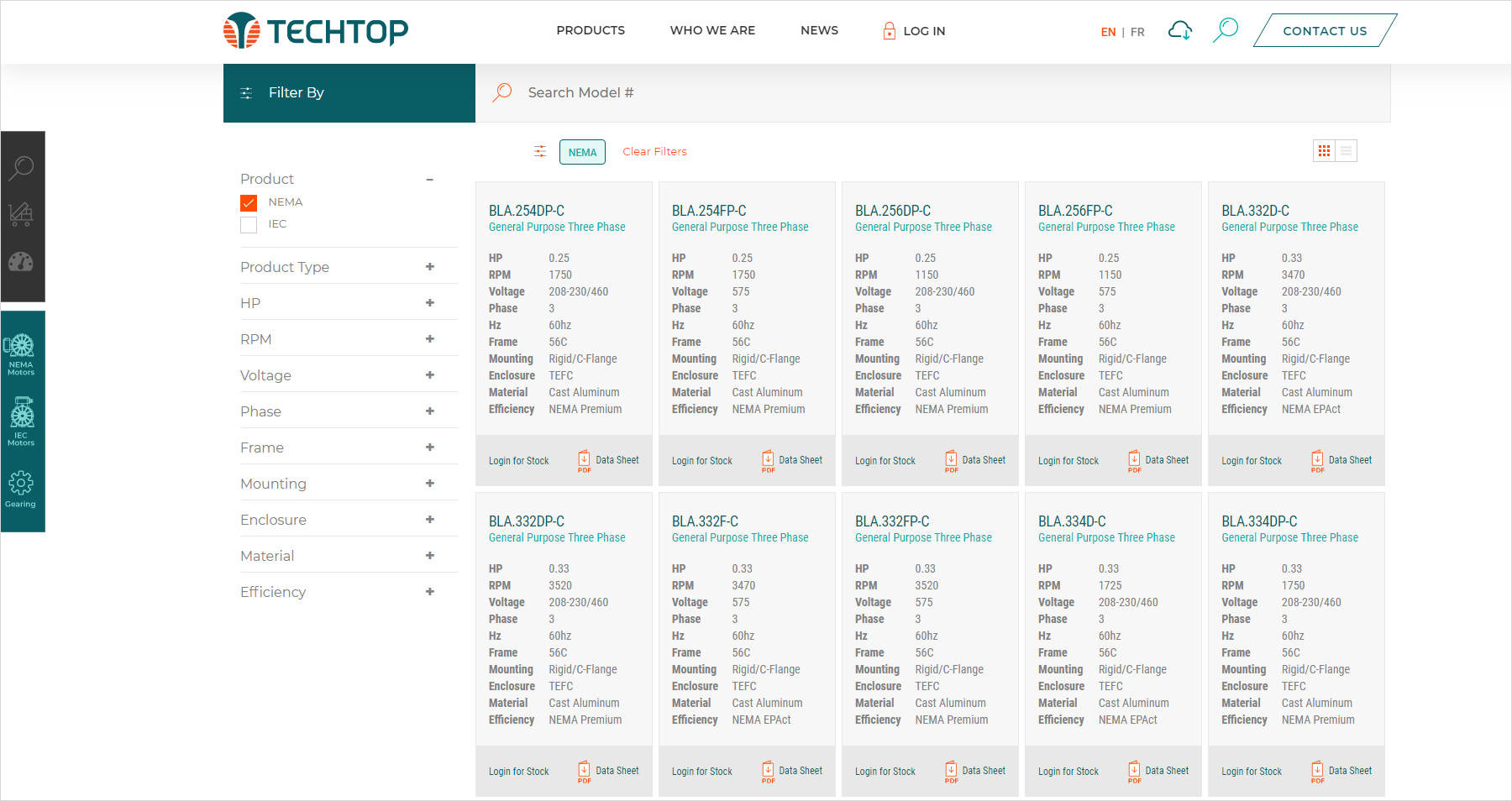 The Techtop website features a complex and customized search system that lets users narrow their results by horsepower, RPM, voltage, and more.

The results can be further refined through quick-access filters and re-query without reloading, making for a smooth and intuitive user experience.

Orders began flowing into the new Techtop website the day the website was launched. We continue to make new features and work on new projects for Techtop and look forward to furthering our relationship with them for years to come.

“The compliments have been flying in, the website is simply beautiful. It's such a huge accomplishment. Its been an absolute pleasure working with you all.”